Suffragettes, the First Wave Feminists, led the effort to protect and support our boys 100 years ago.
Mother Jones, for example, led a march of boys to the summer home of Pres. Theodore Roosevelt. 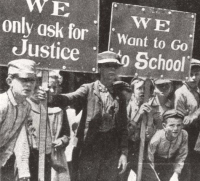 Mother Jones and the boys asked the President to allow boys to go to school.  The boys were working more than 50 hours a week in factories.  They wanted to spend some of the time over 40 hours going to school.

Being a highly enlightened President, Roosevelt of course denied the request.  It took another 20 years, and another great suffragette, Helen M. Todd, to get boys back in school.